The purpose of the mask was to keep away bad smells, known as miasma, which were thought to be the principal cause of the disease. Doctors believed the herbs would counter the "evil" smells of the plague and prevent them from becoming infected.

Where did the plague doctor mask come from? 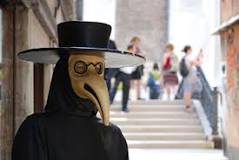 We know only a little about its origins, but it is clear that the plague doctor figure was common throughout Europe since the Middle Age. In the 17th century, a famous French doctor, Charles de L'Orme, perfected the plague doctor mask, giving it the look we recognize today. It was, in fact, a mask with a purpose. Plague doctors may have been immediately recognizable, but until the rise of the germ theory of disease and modern antibiotics, their costumes didn't provide real protection against the disease.
How did the Black Death End?
The most popular theory of how the plague ended is through the implementation of quarantines. The uninfected would typically remain in their homes and only leave when it was necessary, while those who could afford to do so would leave the more densely populated areas and live in greater isolation.